to my father, on his day.

On this father’s day, as I sit listening to President Obama’s speech on fatherhood and having called my father to speak with him this morning a thought crossed my mind. My father has been many things to me; a provider, a coach, a disciplinarian, a friend… The memory that came to mind this morning, was the day that my grandmother died. Below is an excerpt from my journal on that day.

9/27/97
My grandmother died today. My Grandma Smiley. She died of cancer, in her lymph nodes. I didn’t know all day, I guess my 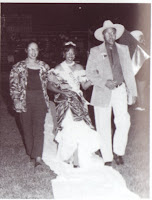 parents didn’t want me to know because it would ruin my day. They said that she died at 9:00am. I don’t know what to think. I feel really shallow. Today was the homecoming game and our parents were supposed to escort us at halftime, for the show. Anyway, it was almost time and my mom and dad still weren’t there and I know that they are really busy, but I was still like ‘This is really important,’ and I started crying. They offered to get me another escort, but I didn’t want anyone but my parents. Our mascot, the eagle, was going to escort me, but right when we were walking over, my mom and dad came. I could tell that something was wrong, but I was too wrapped up in myself and what Eshe needed, that I didn’t even bother to ask. I was just really relieved that they came.

The reason why that incident stood out for me is because being a father is often about sacrifice. I was very excited to have been selected by my peers to sit as a princess on the homecoming court, in Belen, NM. I was the first African American to sit on the homecoming court in 20 years. For my father, allowing me to have that moment meant that he swallowed his pain, and showed up for me to walk me down that field at half time.

My father is far from perfect, but he is a good father. I love him dearly and the thing I will remember always is how he has shown up for me. From the time he had to confront my 5th grade teacher for trying to block me from going to represent my class at the Optimist’s club speeches to the basketball game where he jeered me when I shot at the wrong basket — a story he LOVES to tell, I know what it’s like to have a father present in my life. To all of the men who believe that a father’s job is to provide, I respect that, but it is so much more. My father is the man who taught me that love is displayed through action.