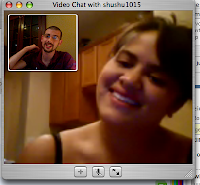 zapp and roger were visionaries. why would i say such a thing? let me break it down for you computer science style…

“Computer Love” was released in 1986. if you are unfamiliar with the song, this fact may be of no consequence to you, so please click the link and allow me to illuminate its brilliance as you listen (or wax nostalgic). approximately 10 years before the internet became widely utilized, 15 years before online dating became a socially accepted norm as a means to find love, zapp and roger were extolling the virtues of technology to search for, locate and maintain romantic relationships. my hat also goes off to the creators of back to the future II. during one scene a naked caller accidently video dials the mcfly residence illustrating, what is arguably, the most common use of video chatting (i have absolutely no statistics to back this claim, it is purely anecdotal).

for those of us who have been been in a long distance relationship, tools such as skype, iChat and google’s video chat have helped put a face to the voice on the other end of the line. they have enabled a more “human” element in the fight to make it last forever when our loves are out of reach. back in ’86, it may only have been a futuristic take on finding love, but technology has finally closed the gap. ironically, it seems that the potential to make a human connection is what has driven our most recent cyberspace crazes (see: myspace, twitter, facebook…)

zapp and roger’s computer love was the precursor to many a digital love song. though i cannot crown them all with the title of “visonary” here is a nod to those that i can remember, in no particular order: